Even our receptionist, Dani, has been coming to our office for 27 years! 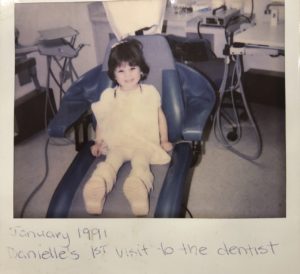 With the school year fast approaching, let’s take a minute to learn about where modern day dentistry first started:

5000 BC – “Tooth worms” is described as the cause of decay in a Sumerian text.

700 AD – An ancient Chinese medical text mentions the use of an amalgam filling material referred to as “silver paste”.

1210 AD – The “Guild of Barbers” is established. These barbers could perform bloodletting, teeth pulling, and cupping therapy-in addition to cutting your hair and shaving facial hair. (YIKES)

1723 – Pierre Fauchard (“The Father of Modern Dentistry”) publishes The Surgeon Dentist, A Treatise on Teeth (Le Chirurgien Dentiste). The book was the first to describe a comprehensive system for the practice of dentistry including basic oral anatomy and function, operative and restorative techniques, and denture construction.

1768-1770 – In the first known case of post-mortem dental forensics, Paul Revere identifies his friend’s body from a bridge he had constructed for him.

1790 – The first “dental drill” operated by foot pedal is created by John Greenwood out of his mother’s foot treadle spinning wheel.

1864 – The rubber dam is invented, a device still used today to isolate the tooth from the oral cavity during procedures.

1880 – Toothpaste is revolutionized with the invention of the collapsible metal tube. Previously, toothpaste was sold in liquid or powder form (made by dentists) and packaged in bottles, pots, or paper boxes.

1950 – The first fluoride toothpastes are marketed and become industry standard within 20 years.

1960 – Lasers are developed and approved for soft-tissue work.

Many, many more developments in materials and procedures have occurred since then and come to form dentistry as we know it today. Stop in to our friendly Coquitlam office and book your next cleaning and check up with Dr. Shahriary! Call Today (604) 936-1263

Did you know there is a right and a wrong way to floss? Many patients receive oral hygiene instructions when they are young but do not receive tips or information about their technique later in life to “refresh” their knowledge.

We are happy to provide oral hygiene instruction, tips, or answer your questions at your regularly scheduled appointments. Schedule yours today! (604) 936-1263