As a caregiver, you’ve got a lot on your mind. Keeping your loved one’s mouth healthy is important for their dental health, overall health and so much more.

No matter your situation, daily care plus professional care equal the best chances for a healthy mouth.

Many older adults can care for their own mouths on a daily basis but may still benefit from your support. In these cases, here are some ways you can support their mouth care routine:

Still, keep an eye on your loved one and his ability to care for his mouth. If your loved one is no longer capable of taking care of his teeth then develop a routine where you can help do it for them.

Adults who are unable or unwilling to care for their mouths may need your help. Always treat the person compassionately, as you would want to be treated. Learning to brush someone else’s teeth takes a great deal of patience and trust.

Here are a few tips to get started:

You may also need to be flexible if your loved one resists. Try a different time of day; sometimes the traditional times are not the best times to get it done. Try again after lunch but before their afternoon nap.

If your loved one continues to resist brushing, it may be because they are experiencing pain or have a dental need. See if they can communicate the issue to you. If not, call the dentist to explain the situation and see if an appointment is needed.

Dentures, whether partial or full, need to come out every day and be cleaned morning and night. Make sure dentures come out before your loved one falls asleep. Dentures may dislodge and become a choking hazard

When you’re a caregiver for someone who is confined to bed, they may have so many health problems that it’s easy to forget about oral health. However, it’s still very important because bacteria from the mouth can be inhaled into the lungs and cause pneumonia

When your loved one has a memory or neurological disorder like Alzheimer’s or dementia, take care of any potential dental needs in the early stages of the disease when the person can cooperate with dental care. It is a good time for the caregiver to form a rapport with the dentist and discuss long term treatment plans. It is also the right time to discuss the patient’s needs while they are still able to express their desires.

If your loved one has any special dental needs, let the staff know – and don’t be afraid to state the obvious. If they have dentures, point it out to make sure those are also being cleaned and cared for. It may also help to make sure his case is labelled with their name.

If you’re told your loved one is having difficulty with dental care, work with the care staff to find a way to make it happen. If your loved one is resisting or is having difficulty during tooth brushing in the advanced stages of dementia, try different flavours of toothpaste to encourage cooperation, or use warm water to see if it makes a difference. Patients  with dentures may find the gum and soft tissue may be sore and fragile, so wipe the mouth with a soft cloth dipped in water.

For more tips and advice for you, the caregiver see MouthHealthy for a more in depth article.

A shapeshifting robotic microswarm may one day act as a toothbrush, rinse, and dental floss in one. The technology, developed by a multidisciplinary team at the University of Pennsylvania, is poised to offer a new and automated way to perform the mundane but critical daily tasks of brushing and flossing. It’s a system that could be particularly valuable for those who lack the manual dexterity to clean their teeth effectively themselves.

The building blocks of these microrobots are iron oxide nanoparticles that have both catalytic and magnetic activity. Using a magnetic field, researchers could direct their motion and configuration to form either bristle-like structures that sweep away dental plaque from the broad surfaces of teeth, or elongated strings that can slip between teeth like a length of floss. In both instances, a catalytic reaction drives the nanoparticles to produce antimicrobials that kill harmful oral bacteria on site.

Experiments using this system on mock and real human teeth showed that the robotic assemblies can conform to a variety of shapes to nearly eliminate the sticky biofilms that lead to cavities and gum disease. The Penn team shared their findings establishing a proof-of-concept for the robotic system in the journal ACS Nano.

“Routine oral care is cumbersome and can pose challenges for many people, especially those who have hard time cleaning their teeth” says Hyun (Michel) Koo, a professor in the Department of Orthodontics and divisions of Community Oral Health and Pediatric Dentistry in Penn’s School of Dental Medicine and co-corresponding author on the study. “You have to brush your teeth, then floss your teeth, then rinse your mouth; it’s a manual, multi-step process. The big innovation here is that the robotics system can do all three in a single, hands-free, automated way.”

“Nanoparticles can be shaped and controlled with magnetic fields in surprising ways,” says Edward Steager, a senior research investigator in Penn’s School of Engineering and Applied Science and co-corresponding author. “We form bristles that can extend, sweep, and even transfer back and forth across a space, much like flossing. The way it works is similar to how a robotic arm might reach out and clean a surface. The system can be programmed to do the nanoparticle assembly and motion control automatically.”

“The design of the toothbrush has remained relatively unchanged for millennia,” says Koo.

While adding electric motors elevated the basic ‘bristle-on-a-stick format’, the fundamental concept has remained the same. “It’s a technology that has not been disrupted in decades.”

Several years ago, Penn researchers within the Center for Innovation & Precision Dentistry (CiPD), of which Koo is a co-director, took steps toward a major disruption, using this microrobotics system.

Their innovation arose from a bit of serendipity. Research groups in both Penn Dental Medicine and Penn Engineering were interested in iron oxide nanoparticles but for very different reasons. Koo’s group was intrigued by the catalytic activity of the nanoparticles. They can activate hydrogen peroxide to release free radicals that can kill tooth-decay-causing bacteria and degrade dental plaque biofilms. Meanwhile Steager and engineering colleagues, including Dean Vijay Kumar and Professor Kathleen Stebe, co-director of CiPD, were exploring these nanoparticles as building blocks of magnetically controlled microrobots.

With support from Penn Health Tech and the National Institutes of Health’s National Institute of Dental and Craniofacial Research, the Penn collaborators married the two applications in the current work, constructing a platform to electromagnetically control the microrobots, enabling them to adopt different configurations and release antimicrobials on site to effectively treat and clean teeth.

“It doesn’t matter if you have straight teeth or misaligned teeth, it will adapt to different surfaces,” says Koo. “The system can adjust to all the nooks and crannies in the oral cavity.”

The researchers optimized the motions of the microrobots on a small slab of tooth-like material. Next, they tested the microrobots’ performance adjusting to the complex topography of the tooth surface, interdental surfaces, and the gumline, using 3D-printed tooth models based on scans of human teeth from the dental clinic. Finally, they trialed the microrobots on real human teeth that were mounted in such a way as to mimic the position of teeth in the oral cavity.

On these various surfaces, the researchers found that the microrobotics system could effectively eliminate biofilms, clearing them of all detectable pathogens. The iron oxide nanoparticles have been FDA approved for other uses, and tests of the bristle formations on an animal model showed that they did not harm the gum tissue.

Indeed, the system is fully programmable; the team’s roboticists and engineers used variations in the magnetic field to precisely tune the motions of the microrobots as well as control bristle stiffness and length. The researchers found that the tips of the bristles could be made firm enough to remove biofilms but soft enough to avoid damage to the gums.

The customizable nature of the system, the researchers say, could make it gentle enough for clinical use, but also personalized, able to adapt to the unique topographies of a patient’s oral cavity.

To advance this technology to the clinic, the Penn team is continuing to optimize the robots’ motions and considering different means of delivering the microrobots through mouth-fitting devices.

“We have this technology that’s as or more effective as brushing and flossing your teeth but doesn’t require manual dexterity,” says Koo. “We’d love to see this helping the geriatric population and people with disabilities. We believe it will disrupt current modalities and majorly advance oral health care.”

Hyun (Michel) Koo is a professor in the Department of Orthodontics and divisions of Community Oral Health and Pediatric Dentistry in the School of Dental Medicine and co-director of the Center for Innovation & Precision Dentistry at the University of Pennsylvania.

Edward Steager is a senior research investigator in Penn’s School of Engineering and Applied Science.

This work was supported in part by the National Institute for Dental and Craniofacial Research (grants DE025848 and DE029985), Procter & Gamble, and the Postdoctoral Research Program of Sungkyunkwan University.

Materials provided by University of Pennsylvania. Original written by Katherine Unger Baillie. Note: Content may be edited for style and length.

Chances are, if you have had a crown or bridge done in our office in the last few years it was made by Nassar at Saba Dental Lab. This August, our office was fortunate enough to be invited out on Nassar’s sail boat for an evening of delicious food and gorgeous sights in Deep Cove.

Dr. Ross helped Nassar dock the boat and fuel while Morgan and Nada earned their “sea legs”. Beth and Dani soaked up the child-free sunshine. A great time was had by all.

While on a quick stop over at Arm’s Reach Bistro for appetizers and drinks, Dr. Ross and Nassar realized they had a connection back home in Iran. Nassar’s lab used to make crown and bridge work for the hospital that Ross’s father helped build!

We feel so fortunate to have beautiful  Saba work in our patient’s mouths. His crowns and bridges look natural, they’re durable, and are of exceptional quality. 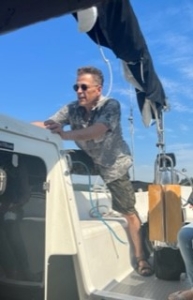 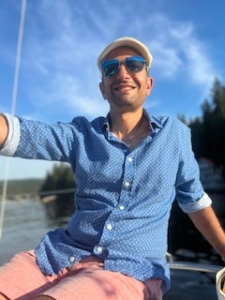 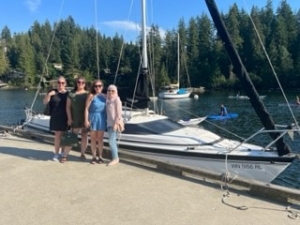